Get fresh music recommendations delivered to your inbox every Friday.

I MISS RAVING, BUT I DON'T MIND VR SHOWS EITHER 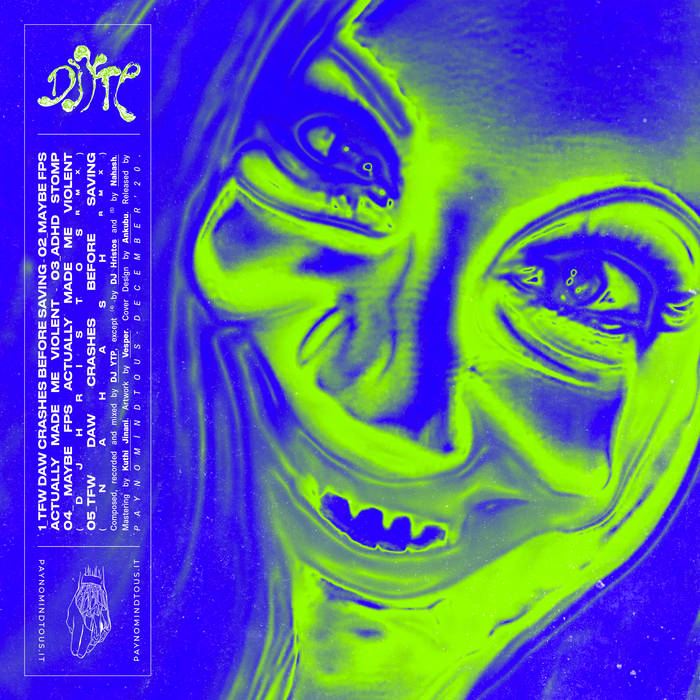 DJ YTP (they/them) is the previously-unheard music incarnation of Xenia fka Diego Innaro from Verona, Italy. Already appeared with a handful of other monikers on labels such as Artetetra (as Electro Summer Arcade), Die Schachtel (as Nazis In Paris), Icore Produzioni (as ChillD), and on our ‘WE NEVER WILL’ comp out this summer (as босс кокос), the DJ, producer, RocketRadio (VR) radio host, and owner of Svbterrean Tapes svbterreantapes.bandcamp.com, is presenting their latest laptop electronic music outlet which could be aptly described with the tags ‘Hardcore Eleganza Extravaganza’ and ‘Moronic Dank Dance Music’.

Also featuring two stunning reworks by DJ Hristos and Nahash, members of DJ YTP’s url network, the three-track debut EP ‘I MISS RAVING, BUT I DON'T MIND VR SHOWS EITHER’ reminisces of the late 90s, rave-influenced music they used to listen and party to - such as eurodance, Lento Violento, and happy hardcore, all the way to tribe tekno and other exciting high-bpm styles. This broad range of inspirations has been collapsed into dense compositions of dissected industrial hardcore and breakcore, obtained via an algorithmic, deranged dismantling of multiple audio sources such as anime, movie, and videogame samples in the form of harsh rhythmic outbreaks. DJ YTP’s artistic process is to all extent similar to the one behind the creation of YouTube poop videos, in which loud desecration and conceptual destruction are meant as ultimate, cathartic liberation.

DJ YTP: “I wanted to encapsulate 25 years of passion and discomfort into a record that could be equally violent, technical, and fun, and at the same time immediately accessible and enjoyable. Enough with intelligent and serious music. Fuck any form of elitism whatsoever. This EP is dedicated to my squad”.

We aim at triggering change within the Italian music scene. We support border music styles and explore unsafe sound territories. We want to grow a community of people united in mutual support and unconditional, careless passion. ... more

If you like I MISS RAVING, BUT I DON'T MIND VR SHOWS EITHER, you may also like:

Bandcamp Daily  your guide to the world of Bandcamp